The Gloves are Off! Sense & Sensibility Read-Along, Chapters 33 - 36

This might be the shortest section yet, but I have the most to say about it. Here are the readings.

My secret reason for doing this read-along is that I wanted the chance to share my bitter, bitter disappointment, 8 years and more brewing, over the 2008 mini series adaptation of this book. And now that we have got through the critical plot points in the novel, I am free to spit my venom.
I must preface this tirade by saying that I do not blame the actors. I never blame the actors. Who wouldn’t want to be in this production? And you have to do what the script and the director tell you, so it is really not the fault of the thespians. All of them actually gave very good performances, quite excellent in some cases.

The person I blame is Andrew Davies, the great, genius, mastermind screenwriter responsible for almost every BBC costume drama you or I have ever watched. He wrote the screenplay for the Colin Firth Pride and Prejudice. He wrote every Dickens mini series I have ever seen, as well as all the Gaskell ones and a thousand others. All have been excellent, artistic, insightful, and sensitive to the original work. So, you can imagine my excitement when I found out he was going to be adapting Sense and Sensibility into a mini series! Finally, all the little gems were going to get the time they needed to shine. All the characters would have space to show their nuances, their brilliancy. All would be given the treatment of Mr. Davies’ exceptional skill and talent.

And consequently, imagine my disappointment, having waited months for the release of this anticipated masterpiece, when it was ruined in the VERY FIRST SCENE!!!! Having read the book with me, you will see that Willoughby, though not so restrained in his expressions as would please Elinor, is otherwise loved by all, including the reader. We have NO CAUSE to suspect his true nature, which is WHAT MAKES THE STORY WORK! If you have not seen the mini series, brace yourself for this news: The very first scene is of Willoughby seducing young Eliza! Our very first information is that THIS MAN IS A ROGUE! BEWARE! I could probably just about tolerate everything else, but that, the very opening, was the absolute limit for me. With that given away, what is even the point of the story? Austen’s whole careful construction is gutted from the start.

And then, we have Mr. Edward Ferars. He rides in on a white horse, all tall and handsome and dashing (seriously? Edward? Did you READ Austen’s description of him?) Later, he has to go out and chop wood in the rain, to work out his manly angst over his conflicting passions. In an interview, Andrew Davies actually said he didn’t think the men in the novel were good enough, and he had to improve them by making them more strong and masculine. Is he completely missing the point? Did he not read the bit where Marianne complains to her mother about how Edward is NOT dashing? Does he not get that he is SUPPOSED to be kind of awkward and intellectual and that this suits Elinor?

And furthermore, in the interview, Andrew Davies says they wanted to differentiate themselves from the film, but it was almost like they made a mini series of the film in some ways, as they replicated certain things that were in the film but not the book! And, my first thought on seeing Edward (who had not yet come to notoriety as Matthew in Downton Abbey), was that he looked exactly like a young Hugh Grant! Honestly, tell me I’m making this up:

So then we meet Willoughby again in Devonshire, and not only are we, the audience, on guard against him because of that ridiculous opening scene, but they actually have Colonel Brandon take Willoughby aside and press him as to his intentions towards Marianne! What the actual Ferrars!
Brandon has no reason to suspect Willoughby of anything at this point. As far as anyone is supposed to know, he is to inherit the old mansion, he likes to hunt, and he has his own house at Combe Magna. He likes dogs and dancing into the night. And in what possible world would a gentleman like Brandon, who has absolutely no relationship with Marianne, and who is extremely well-bred and genteel, ever, ever, EVER, take it upon himself to confront another gentleman about his conduct (which is not even questionable) towards a young lady? It’s beyond absurd. It’s infuriating. It undermines everything.

Then, as if Brandon has not been made enough of a barbarous fool, we see him London, after Marianne’s disappointment, barge in on Elinor and thrust at her everything he knows to Willoughby’s detriment. There is no delicate attempt to raise the matter of another gentleman’s reputation, no indication he appreciates the awkwardness and difficulty of the matter, no half a page’s dialogue of allusion and suggestion and attempt to force an inquiry from Elinor. To so defame another gentleman to so destroy his reputation to a lady, would not have been undertaken lightly by Brandon, and is NOT taken so as Austen wrote it! It’s abominable. And it’s not like they have the excuse that they were pressed for time. They had a whole mini series! And Emma Thompson still had her Colonel Brandon undergo all the necessary preliminaries within a film of under two hours’ duration. 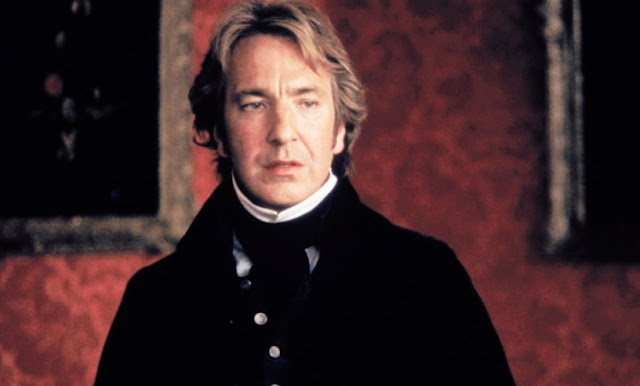 And that is the real crime here. There is so much material to explore, so much that by necessity has to be cut from a film, but that would be delicious to indulge in all the space of time allowed by a mini series, and they chose so little. Instead, they spent half the film on redundant scenic shots of the Devonshire countryside, like it was some sort of BBC travel program. (Nothing against a good BBC travel program, but that is not the point.) It was as though they were trying to copy the 1995 Pride and Prejudice film adaptation. It had a similar feeling of moody introspection and glassy, aesthetic. I really think that comparison is enough to convey my sentiments.

In its defence, it did have some great performances. As I said, the actors were not to be faulted. The role of Elinor has gained much critical attention, and I would support that, while adding that Marianne was also excellent. Though I don’t know why they always make Marianne shorter than Elinor, when it specifies in the book that she is taller. It’s a small point, I know, when there is so much to consider in casting, but Jane Austen didn’t give much description, so I feel like what she does say must be important and ought to be heeded. But that’s my only real beef with the casting, so that’s pretty small. I mean, Willoughby looks like a blackguard, but with his charactre ruined so early on, I’m not sure that’s really a casting issue.

Possibly the only truly great thing about this adaptation is that it included the character of Anne Steele, who is a highlight for me, and was not included in the film version. 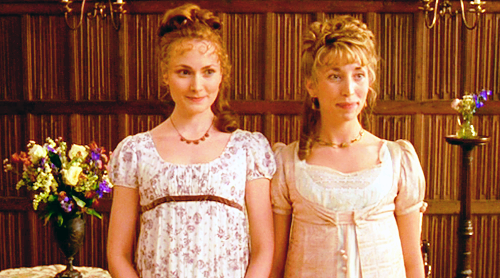 I have this dream of making a historical drama based on this book, like Downton Abbey, but Regency. There is so much to go into. The first chapter alone could almost be a whole season, and we could give space to all the characters, playing out all the scenes that must have happened but are not spelled out in the book. I mean, we would all know how things “ended” but that wouldn’t be the point. There’d be lots of chances for witty quips and jibes and lovely gowns and pretty rooms. Do you think anyone would watch that? I’m probably insane. But then, there are a lot of other insane people out there...

Please do share your thoughts below. Feel free to take me on in my harsh opinions, or my veneration of the film, or my madness in thinking anyone would want to watch hours and hours of this book on TV. I always look forward to a good debate!