Non-Review of League of the Star by NR Cruse 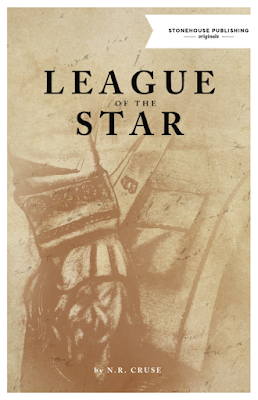 This review could have been very awkward. Since publishing my book with Stonehouse, which also published this book, I have come to know the author quite well, and that is a dangerous game if one intends to write a review. I did not promise one, however, and that gave me an out, which, as evidenced by this post, I have not been obliged to rely upon. Thank goodness.

If you can imagine The Count of Monte Cristo, thrown into bed with Frances Burney, the result might be the adventure novel/comedy of manners that is the debut novel of NR Cruse: The League of the Star. I don't quite know what I expected to read when I picked up this book. I think I anticipated some slogging work about the catastrophe of revolution, something in the vein of War and Peace perhaps. Imagine my delight when instead, I was drawn into a plot (or I should say, plots) at once gripping, dramatic and intriguing, keeping me up at night far beyond what my interests or my judgment ought to have allowed. Replicating the erstwhile popular literary form of the epistolary novel, the book also employs language reminiscent of the time and plot lines that really do remind one of contemporaneous tales. It has love. It has war. It has some very silly people and some rather noble ones. I have a feeling it might appeal to fans of the Master and Commander series, but I've never read those books, so that is a very ignorant recommendation.
It is not like a Jane Austen novel, though. There is much more violence, and the principle character is a man, which is something Austen would never have done. But it isn't pretending to be an Austen novel, so that is not to be minded. I only mentioned the fact because I usually only review Austenesque novels. I felt this one was close enough, as Austen was very much affected by the revolution, with her own brother marrying the widow of a French peer who was guillotined. These themes and this backdrop would have been familiar to her.
The story itself was a weaving together of three distinct and compelling plot lines. I really did have to know what happened next. The characters were varied and distinct, and there were moments when I laughed at their folly and when I felt their pain. There were many twists and turns, of which I guessed at some, and others utterly stunned me. At one point, I had to go back and re-read the same passage several times just to confirm that I had not misread it, and that it was really the shocking revelation that I had not at all seen coming!

It was a solid first book. I am so relieved.
And, let me make this plea, that if you read this book, or any other book, especially by a new author, or published by a small, new or local publishing house like Stonehouse Books, please do leave a review of it on Goodreads, or Amazon, or Chapters.ca, or EPL.ca (yes, they do reviews), or your blog if you have one. It need not be long or involved. "I liked this book" would be a very helpful and adequate review. It's free to leave a review, and there is almost no better way to support authors.
Here is the publisher's information about the book:

LEAGUE OF THE STAR

N.R. Cruse
Order online
HardCover $32.99 CAD
ISBN:  978-0-9866494-6-2
Softcover $19.95 CAD
ISBN 978-0-9866494-2-4
iBook $8.99 CAD
Kindle $8.99 CAD
Kobo $8.99 CAD
It is the dawn of the French revolution when masses of hungry peasants burn the chateaux of aristocrats throughout France.  After the death of his estranged family, an 18 year-old nobleman, the Marquis Marcel de la Croix, is forced to raise the royalist banner, despite his own revolutionary leanings.  The wreck of his family fortress becomes a bastion for newly disenfranchised aristocrats, and Marcel and his fiery associate, Pierre Lafont, lead a rebel group called the League of the Star.
After a bitter falling out with Lafont, Marcel escapes to England incognito, hoping to put the past behind him.  In England he encounters several French emigres: the large, brutish former soldier, M. Tolouse, the haughty Mlle. de Courteline, and the sheltered Mlle. Vallon.  As these traveling exiles are forced together, a young boy in their company begins to intrigue them with a mysterious tale of love.  Can a simple love story, begun merely to entertain the weary travellers, hold the key to Marcel’s fate?