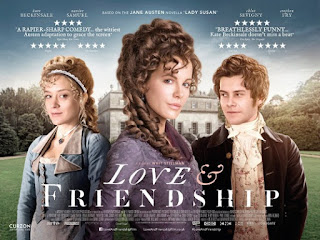 I never read reviews before I watch movies or read books, because it colours my opinions. So I don't know what other people are saying about this movie, but what I have to say is that, in a nutshell, it DELIVERS. This is my idea of the highest compliment. So often, I have an idea of what something is or will be, and then it just doesn't deliver on its promise. I don't expect everything to be to my taste, and I don't expect everyone to like the same things I do, but I do want things to be what they purport to be. And this show does exactly that. I saw it in the theatre, twice.
I went back and read the novella, just to  be sure my recollection was correct. (By the way, the novella is called Lady Susan, in case you are confused. Love and Friendship is a different story. They just switched the name.)
Essentially, the show is a hilarious serious of nonsense and witty lines, in beautiful costumes and ancient houses, with ridiculous characters and a whole lot of scheming. It is much more Georgian than Austen's other works, and much more youthful. There is nothing profound about it, but it is deeply enjoyable. And I thought it was very true to Austen, though not all the lines seemed to come from the story itself, they were perfectly on point. I especially loved all the biblical stuff that they put in, as Austen's father was a clergyman and I think she would have appreciated the way it was used. Terrific screenwriting all round, I'd say!
The second time we went to see it, a couple of ladies approached us and were surprised at our enthusiasm for it, as they said they absolutely hated it, so to each their own I suppose, but they didn't seem all that familiar with the period, so probably thought it was going to be some sort of Brontean tragedy or something. They said they wanted it to go more slowly...???? It is not slow. It is quippy and sharp and delightful.
The casting was perfect. I found Kate Beckensale's performance very refreshing. I half expected a sort of Lady Bracknell in drag type of approach, an over-enunciated langour that tends to accompany this sort of drama, but she was very off-hand in her delivery, almost casual, and I thought it made it all the funnier.
And I would be remiss if I did not mention how I could stare at Mr. Reginald De Courcy ALL DAY! ***Sigh****
My only complaint comes from the only thing I knew about the film in advance, which had to do with Chloe Savigny. I read that she was cast, and had prepared a flawless English accent, and then at the last minute was told to drop the accent and they tweaked the script to make her American. BOO! This was a bad choice. The director said her accent was unexceptionable, but that he thought audiences would be distracted by their scrutiny of it. WRONG! We were distracted  by her American accent in the midst of a classic English setting. It threw off the whole cadence of every scene she was in and made her lines sound amateur and out of place it did not work. Furthermore, the director HIGHLY overestimates our knowledge of who the hell this actor even is. I wouldn't have known she was American. I only knew because there was an article in a doctor's office telling me as much. Apparently, she was some sort of darling of the 90s, which was when I was paying attention to what was cool, and I still don't know who she is. And when half the people going to this movie haven't paid attention to what was cool since probably the 70s and, like me, mostly watch British programs anyway, I doubt it would have been anything of an issue.
So, that is my rant. Clearly, it did not detract too much from my enjoyment of the film. I am even considering buying it when it becomes available for that sort of thing.
I've posted the trailer here for those who like to watch trailers. Let me know your thoughts on the film, whether they are sympathetic to mine or no. I do enjoy a healthy debate.