Downton Abbey and the History of Clean Hair 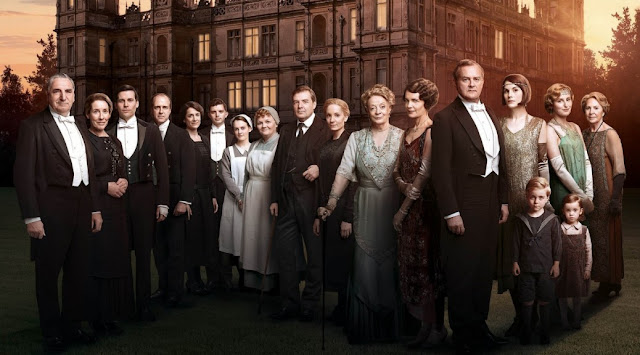 I confess that we watched the final season of Downton Abbey when it played in Britain last year. We streamed it using a proxy server, which is WAY beyond my technical prowess, and if my husband were not also a fan of Maggie Smith, I doubt I would ever be able to watch it, because we don't even have cable.

Without giving anything away, I feel it is safe to say that in the Christmas special finale, many things of significance were done and said, wrapping up a long, soapy story. But the one I picked up on, the one that made me want to write a blog post, was a little, forgettable, off-hand remark made by Molesly of all people.

He said to Baxter, as they were walking in the village, that shampoo was actually Indian, that the Indians had it for centuries before the English. This is just the sort of tidbit that Julian Fellowes likes to drop for us nerds to catch, and it reminded me of a few tidbits I have come across in my own research, and which lead me to hypothesize about how India changed the face of English fashions.

Mr. Molesley was, in part, absolutely right. The word shampoo comes from the Hindi word meaning massage. So if, in your Regency reading, you encounter people talking about going for a shampoo, they were likely going to an early massage parlour, or Turkish bath, where such things were purveyed. The idea was first brought to England by one Sake Dean Mohamed, who was appointed the "shampooing surgeon" of George IV as well as William IV.

The hair-washing type of shampoo was at one time made from soap nuts, or so I have read. My first encounter with soap nuts occurred as a result of cloth-diapering my first-born. Soap nuts are recommended as a natural washing agent that will not leave residue and make the diapers smell. They are the fruit of a tropical tree and, when agitated in water, release their waxy coating in a sudsy froth that dissolves oils and cleans things. They have been used in India since well before Regency times, both for laundry and for personal cleanliness, including washing hair.

Body soap in the Regency was made with lye and would have been quite harsh on hair, I imagine, though I have never tried it. I have also never tried modern soap on my hair. Generally, it all seems like a bad idea. Also recommended during the Regency for hair washing, was to apply beaten egg whites to the roots of the hair, leaving them to dry and then rinsing them out. While this may have been effective, it smells terrible! And not amount of rinsing can get rid of that acrid odour. Soap nuts, unlike soap, are very gentle, but like eggs, smell awful.

So, Regency ladies would have their hair washed with a solution either made from the liquid in which soap nuts had been  boiled, or into which soap had been shaved and dissolved. To this liquid were added essential oils and herbs and probably vinegar. (My grandmother has always sworn by the efficacy of a vinegar rinse for making hair soft and shiny and manageable.) The herbs and oils may also have benefited the hair, but more likely covered up the wretched smell of the soap nuts, which really do smell HORRIBLE when you boil them. And they would not have used it in the way we use shampoo, just rubbing it into their hair. It wouldn't have worked. They would have agitated it and then taken the foam and worked it through the hair. It would have been quite an undertaking.

The point I am attempting to make is that shampoo as we know it did not really exist in the Regency, or even in India. So, sorry Julian Fellowes, but even the word "shampoo" was not used to describe liquid, hair-washing preparation until the Edwardian era, which really saw the flourishing of commercial products of all kinds. So it would not have been any sort of surprise to Baxter, hearing the fact in the 1920s, that shampoo had not always been part of English life.

Non-soap-based shampoos, made instead with chemical surfactants, were not produced until the 1930s, and that is what we all use now. And let me say that for all my love of history, I am very glad not to be living in it. Shampoo as we know it is so much more effective and user-friendly than any soap nuts liquid. Believe me. I have tried both.