So we finally see why Lucy needed an older, stupid sister. Everything in Austen has a purpose, and who was going to reveal the engagement if not Anne (aka Nancy, which apparently is a nickname for Anne, which I only glean from this novel and have never heard from any other source)? I think Anne might have been an after-thought, or at least a late addition, as Austen solved the problem of how to let the cat out of the bag. And I imagine her rejoicing at the opportunity for such ridicule. I mean, how much fun is this character? She is everything Austen loves to mock, and still so real, and almost likeable in her lamentable idiocy. 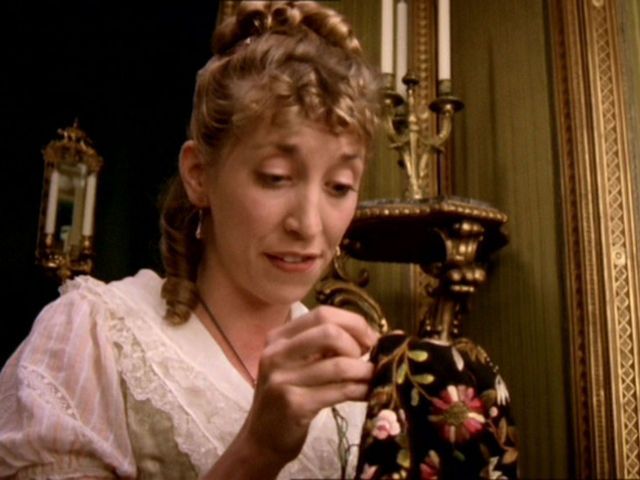 Allow me to just interject here to point out how unmarried sisters were addressed in the old days, in case this has been a source of confusion, or just so you have something interesting to say at a cocktail party. The eldest unmarried sister is always Miss (Last Name), so Elinor is Miss Dashwood, Anne is Miss Steele, and Jane is Miss Bennett. All other unmarried sisters are called Miss (First Name (+Last Name, usually), so we have Miss Marianne Dashwood, Miss Lucy Steele and Miss Elizabeth Bennett, though sometimes, in less formal circumstances, just Miss Marianne, Miss Lucy and Miss Elizabeth. Ladies might, if close, just call each other by their first names, as would family members, but only if no one else was around. And, to make matters confusing, if only the younger sister was around, and there was not risk of confusion, they too could just be called Miss (Last Name). But this was not common. I mention it only to elucidate should you come across an instance of this and find it a contradiction.
Well, at least Elinor will get a rest from all the teasing about Mr. F! But honestly, what a relief to have this all out, for Elinor to be able to talk to her own sister about it. When I think about the restraint of Elinor in keeping this secret to herself, I am struck by the heroism of it. I don’t think I could keep that much to myself ever. I can’t even keep mum when a car cuts me off or uses the wrong lane in a roundabout. I sort of wonder whether anyone keeps any secrets with such solemnity any more. Was this normal for the period, or was Elinor equally remarkable even in her own time?
And does anyone else notice how much emphasis is put on the mistaken belief by everyone that Elinor will marry Colonel Brandon? How would you feel if she did marry him in the end, if Marianne died of the illness that has struck her just now in the story, from walking out in the long, wet grass, dreaming about what could have been with Willoughby if he hadn’t been such a total shit?
I am finding this novel to be quite a lot darker than Austen’s other work. If Marianne dies, Elinor and Brandon could find solace in each other. And I have to say, I am not overly fond of Marianne as a character. We’d all feel for Edward certainly, if he has to marry Lucy forever, but that’s hardly the point. It would be quite a realistic ending, I think, and befitting the tone of the book. But I guess it wouldn’t be very Austen. I mean, that’s what we have the Brontes for, right? And let’s not get ahead of ourselves. We haven’t yet read about everyone’s ultimate fates.
But I will say that I do think Colonel Brandon is really central to the story. He, more than anyone, I think, exemplifies all Jane Austen’s ideals. 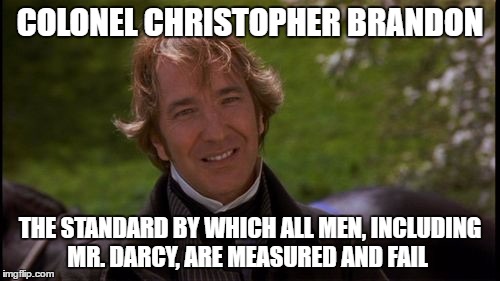 Also, Alan Rickman. My heart. I confess, I would be predisposed to love him because of that portrayal, so expertly exhibited in both the performance and the direction. But in reading over the book, it is clear that he is the standard of both sense and sensibility. He is loving, kind, deep in his feelings and bold and generous in his actions. Yet he is careful. He is not overly demonstrative or rash. He is intelligent, perceptive, measured, humble and warm. Personally, I think Elinor could do much, much worse, and he is quite well suited to her disposition. He has great respect and admiration for her, and seeks her guidance on matters of importance to those near her. He is thoughtful and gentlemanly. Let’s be honest; I’d marry him. Especially if he was actually Alan Rickman. 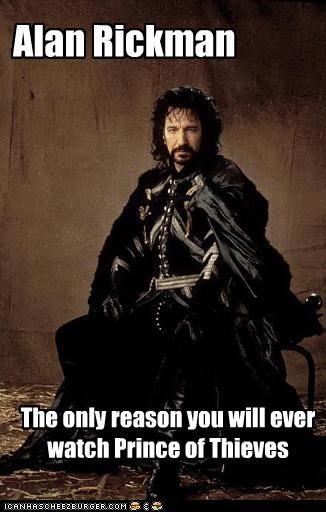