To smart or not to be smart

If you are familiar with the English spoken on both sides of the Atlantic, you might see the humour in the true story of my brother, who had an interview at Oxford and nothing to wear, going from shop to shop asking if they had any dress pants. Canadian readers might wonder, what is so funny about that? UK readers may react with the same confusion and amusement as did the people in the shops.
Where we here in the colonies say, "dress," the denizens of the old country say, "smart." And when they say, "pants," they actually mean, "underwear."

So, essentially, my poor brother was himself rather dismayed that not a single clothing store in Brighton had any dress pants, while the shop attendants wondered why this American guy wanted underwear with dresses on them, or possibly underwear to wear with a dress? Not sure. What he should have been asking for was, of course, smart trousers.

Here is a picture of my brother, looking smart in both senses of the word. Firstly, he is wearing a tie, and secondly, he ended up going to Yale where he was valedictorian and from where he went to work for Google. (Sorry, a sister has to brag when she can.) 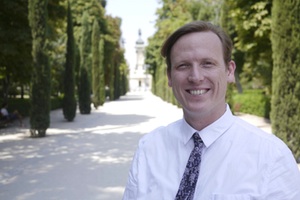 This brings me to my point, which is to clarify the meaning of an English word, for use in historical English fiction. At least here in the New World, we use "smart" to mean intelligent. This usage began in about the mid 20th Century. Prior to that, from about 1700, it meant what it now means in UK English, ie. looking good.

The original meaning, however, is to sting. This, too, is still a use I have heard, though not as common as it once was. It is from this meaning that we get the use for clever, from the idea of having a cutting or sharp or stinging wit. It has also been applied to the sense of being keen in bargaining. These uses are attested from as early as 1300, though are more specific than our modern general use for just being, well, smart.

And just for fun, here is a picture of my brother, with me and my sister, looking smart in a wholly different, much more Regency way. 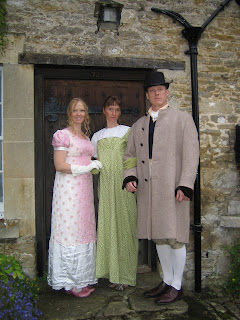