By studies, I mean the vernacular of colonials. I have long noticed, to my great amusement, that for North Americans at least, the word "Victorian" refers to anything predating the First World War. I have heard many such charming remarks as, "I love Downton Abbey, especially the Victorian costumes" or "When you go to the Jane Austen festival, do you wear Victorian dresses?"

I do not wish to be like that English woman who bit my brother's head off for calling the stone manor house a cottage, but I thought I might just clarify a few things in case you don't know. I assume most of you do know, in which case, I write this so that you have something to which you can direct people when you haven't the time or the inclination to tell them why they don't love all that Victorian stuff in "The Tudors."

Also, I have been organizing a lot of Regency events lately, like the Springtime Ball advertised on the right (you should totally come), and an explanation of what is meant by 'Regency' may be useful.

Eras in English history are mostly named after the monarch reigning at the time. The Victorian era refers to the time when Queen Victoria ruled England. She became queen in 1837, aged 19, marking the beginning of Victorian England.

She died in 1901, at the age of 83. The intervening 64 years only are what we can call the Victorian age, or era. Nothing before, and nothing after.

Hers was the longest reign in English history and, I grant you, a long time for any single monarch, so it is somewhat understandable for people to think it covers pretty much all of the olden days. Furthermore, the Victorian era was remarkably prolific, particularly in terms of literature and technology, so much so that we who are so far removed from any other knowledge of England's history think that everything ever produced in the olden days, must be Victorian.

Downton Abbey opens with the sinking of the Titanic in 1912, which is, at best, the Edwardian era, though King Edward himself was actually dead already, as of 1910. His son was on the throne, so that is really two monarchs removed from being Victorian.

Jane Austen's works were published in the second decade of the 19th Century. Jane Austen herself died in 1817, 20 years before Queen Victoria took the throne, and in fact, a year before she was even born. The era we associate with Austen, and when all her books were published, is called the Regency, though you may have heard me refer to it as the Georgian era. Allow me to explain. 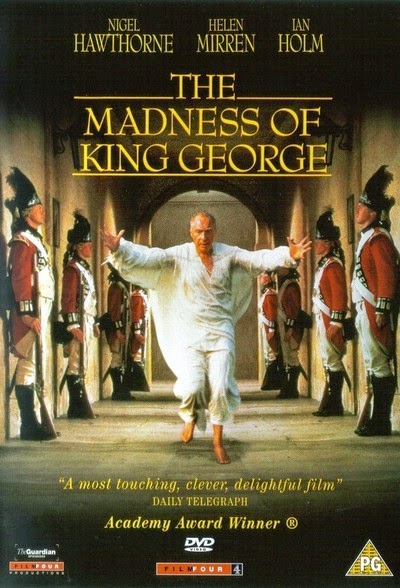 There were several kings in a row who were all called George, and their collective reign is therefore known as the Georgian era, or period. The first of the Georges became king in 1714. The third one, George III, was on the throne when he started to become mentally ill in the late 1700s and early 1800s. They made an excellent film about it called "The Madness of King George." It was going to be called "The madness of King George III" but the producers thought American audiences would not go see it because they had not seen the first two movies in the trilogy. God bless America.

King George III had a son who was also called George, specifically Prince George. In 1811, George III was declared unfit to rule and his son took over, but not as king - as Prince Regent. A regent is someone who rules in a monarch's stead while that monarch is unable for some reason. This sometimes happens when a child becomes king or queen. The monarch is a figurehead only, and a regent is appointed to do the actual job of being in charge.

Prince George ruled as Regent from the age of 39, in 1811, until his father died in 1820, at which point the Prince Regent became the King. Those nine years were and still are aptly called the Regency. It is, however, still correct to call it Georgian, or late Georgian, as the prince was after all a George, and became King George IV, extending the Georgian era until his death in 1830. Some include the subsequent reign of his somewhat under-appreciated younger brother, William, as part of the Georgian era, and that takes us right up to 1837 and the reign of his niece, Victoria.

If you watch the film "Young Victoria" you might discover that she was pressured to allow someone to rule as her regent when she inherited the throne, but she refused. You may also be falsely led to believe she looked something like Emily Blunt, whom I adore, but who really is so lovely, one could be deceived into thinking Queen Victoria was a beauty. I assure you, such was not the case.

So, now you know that the stuff you love in "The Tudors" is Tudor, and everything in "Elizabeth" is Elizabethan. And if you don't know, or don't particularly care about the exact historical period, you can always just call it old.