Pride and Prejudice on the big screen

November 15 saw possibly the most enjoyable six hours I and 250 other Edmontonians have ever spent - with this guy (see below) at Fort Edmonton Park in the historical Capitol Theatre. It sold out in under an hour, and I have been overwhelmed with interest in repeating it. I enjoyed it so much, that even after six hours of sitting, I would have done it all over again the next day... nay, that very same night. "Just put it back to the beginning, Mr. Tech! We want more!" 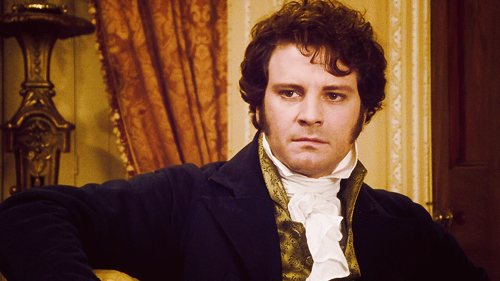 So, since so many people were unable to get tickets, and are hoping for a repeat, and indeed even those who did get tickets would like to do it again, I thought I would write this little post letting everyone in on the background and thus the future of this unprecedented and thrilling event.

I had wanted to put this on for years. Eventually, in 2014, I started trying to track down the rights for a public screening. Many people do not understand copyright and think that as long as you aren't charging any money, or include a disclaimer giving credit to the rights holders and stating that you intend no copyright infringement, then you are not committing an offense. This is like saying, "I didn't intend any theft; I just meant to take it without paying." Or how about, "I did kill him, but look, I held up this sign as I did it!" (sign says: No Murder Intended). So, I had to actually acquire the rights. This proved quite a challenge. I contacted every copyright collective and every agency that I could find. They all directed me to each other. Nobody seemed to know how to obtain these rights. I even called 1800-O-Canada, which is a surprisingly helpful service in the most unexpected situations. They too were flummoxed. I contacted companies that arrange film rights for public viewings like the ones in Churchill square. They could not help me. I was sent to broadcasting rights organizations all across the county. They were all equally unhelpful. Surely, I am not the first person in the world ever to want to put on a show? Was there something about this particular show?

In the end, I went to the BBC shop - the online store where you can order DVDs and mugs and stuff. I dropped them a line. You can imagine, they were not really the right people. But I did not go away.

After a few months, I finally heard back from a guy at BBC International. He told me it was unlikely the BBC would give me the rights. I thought unlikely was not the same as impossible, so I asked him to look into it. He told me there would be a lot of obstacles and it would be very expensive. I may want to have a plan B. I told him my plan B was not to do the event. And let's see what those obstacles are, shall we? Apparently, the BBC never imagined anyone would want to show the program on the big screen and so had not negotiated the rights for that with people like the director. Essentially, the BBC didn't have the power to grant me a license to show the program, because they didn't actually own all the rights to it.

I told them to get me a ballpark estimate, just so I could evaluate whether it was worth pursuing. It was several weeks before he came back with a figure. He said it would be in the range of $37,000.00.

So, that was more than I had expected! And yet I was not deterred. It seems they had decided just to set the price so high that nobody would want to purchase the license and they wouldn't have to renegotiate the rights. Little did they know, I would not be so easily put off. I decided to ask what I would get for my $37,000.00. Could I sub-lease the license, for example? Would it be exclusive to Canada? To North America? For how long? Maybe I could get corporate sponsorship. Maybe I could crowd-fund it. Maybe Cineplex would like to do a national run of it. He said he would get back to me.

It then came up that some people didn't know that you needed to have permission to show programs even if they weren't charging admission. He asked whether I would be interested in a non-theatrical license (one that did not permit admission charges, usually used by schools and private groups), which would have different pricing. I said I could find a way to work with that (again, maybe corporate sponsorship, maybe crowd-funding). He said he would find out the price for that.

Some time later, I received the most wonderful and amazing email. He came back to me saying that the BBC had decided to buy out the rights to the program, so they now had the power to grant whatever licenses they wanted. (I'm not saying this was entirely my doing, but in my heart I do like to think that it was). And they were setting the fee at zero for me and my event. As long as I didn't charge admission, I could show it. He then said that the upcoming Friday was his last day at the BBC, and not to ask any questions but to take this permission and run.

Next was the challenge of finding a way to cover the expenses of putting on a film screening without any income from ticket sales. I was not hopeful about grants. I could sell really expensive refreshments. Maybe do a Kickstarter campaign, but with no rewards, since I couldn't offer admission as a reward. I approached my first choice of venue, which was Fort Edmonton Park, just to get an estimate of costs so I knew how much I had to fund-raise. They took a while to provide an answer, but after several phone conversation and email exchanges, they offered to put the whole thing on for free! We would co-host it. I would provide the license and they would do everything else. What a dream come true! All they asked was the right to sell us food. All the costs of running the theatre and paying the staff would have to come out of the food sales, so they were kind of expensive, but considering the entertainment was free, it was still a good deal.

It turned out I was not the only one with this dream, as I did no advertising and it sold out almost instantly. All I did was make an event on Facebook and invite my friends to it. There were over twice as many people wanting to go as there were seats, and that was just according to the Facebook numbers. There may have been others.


The event itself was absolutely glorious. The weather was perfect. The venue was perfect. Everything was even better than I had imagined it. I was a bit worried that six hours was going to seem long. It didn't. It was such a festive atmosphere. The jokes were funnier with such a large group, and the nuances of the acting, the directing choices, even the editing, were so much clearer and more entertaining when blown up to such a large size. It was truly magnificent and completely unforgettable.

I have written to the BBC to seek permission to repeat this event. I have not yet had a reply, but it is Christmas time. Everyone is no doubt run off their feet. But fear not. I am not easily dissuaded, and I hope, before long, to be able to post good news here, or at RegencyEncounters.com, or on our Facebook page or Twitter. In the meantime, if you are interested in getting first dibs on tickets once I wrangle the BBC into letting me do it again, you can put your name on a waitlist I created on Eventbrite.ca. Just click the "Get Tickets" button and then the "Join Waitlist" button in the window that should pop up. (It was brought to my attention that these links were not taking readers to the waitlist. I have fixed this error and it seems to be working now. Sorry about that!)

Hopefully I will see you at Fort Edmonton Park soon!

Melanie Kerr is the author of Follies Past: a Prequel to Pride and Prejudice and founder of Regency Encounters
Read Chapter 1      Watch the Trailers      Buy the Book