Football banned in London due to player deaths and property damage 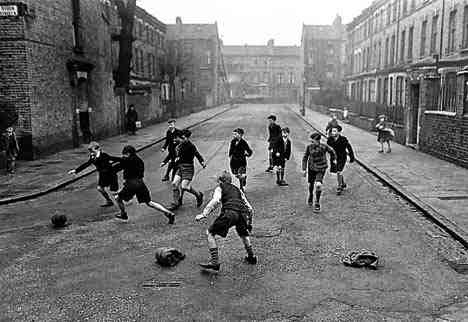 As you might have guessed, this is not current news. My book is about the past, and so are all my posts. This actually happened in the 14th Century, but it did happen. So if you think football has only gotten out of hand in recent years, think again. People were regularly killed, maimed and injured in inglorious ways very regularly right through Jane Austen's time. People would sometimes get stabbed, or break their shins against each other, or break each other's heads. It was very violent. That's why it was banned in London in 1314. It was also banned in Manchester, but you can imagine how that went over. 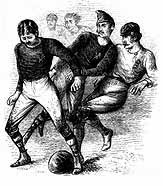 For the benefit of North American readers, I should clarify that I am talking about the game now known as soccer. It was not called soccer until the late 1800's, well after Jane Austen's time, but although the word is mostly used in North America, it is most definitely an English invention. (My apologies to those who already know all this stuff. I only found it out in recent years, and finding it myself quite interesting thought I might as well share it.)

The game was always called football, and in fact, American football derived from it as well. In New Zealand we called the American sport Gridiron. This apparently has to do with the lines on the field. Everyone there played Rugby, which also derived from the same sport and is named for the school where the rules were codified. Rugby school was very posh, and so the game is thought of as more upper-class, though it has the same roots. The game we call soccer is Association Rules Football. The Association was formed in 1863. Association is shortened to Assoc. and as the English have this charming way of putting "er" on the ends of things to make them chummy, they called it soccer. They also do this with rugby, call it "rugger." 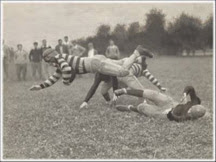 From what I have read, it seems like the sport mostly started in the north of England. It was played in medieval times between neighbouring towns, on Sunday, when folks weren't working. The teams were formed out of the trade guilds, especially the young apprentices. The older men would ride out and cheer them on. Imagine Darcy and Bingley, of an afternoon, on their mounts, cheering for the Lampton blacksmiths in the paddocks of Derbyshire.

The match would start in the middle of a field halfway between the towns, and each town would try to get the ball to the other town's church door, which was the goal. I don't know about you, but I think this is fascinating It sounds a bit more like capture the flag to me than what we think of as football.