5 of the best Costume Dramas you have probably never seen

I concede that I may underestimate the comprehensiveness of the viewing public's experience with costume dramas, and that you may, in fact, have seen all of these, particularly if you are someone who reads this blog, which is clearly directed at people like me, who are costume drama junkies. This is a list of costume dramas that I count among my favourites, but that I rarely, if ever, hear anyone mention. I confess, I kind of like that nobody ever talks about them, because it allows me the somewhat narcissistic pleasure of being the one to tell others about them. These are listed in no particular order, except that I saved the best for last.  And I limited myself to films, just to be kind of consistent.

Songcatcher
If I could describe this movie in a word it would be 'subtle.' It doesn't beat you over the head with anything, and it kind of fades into the background of your memory, which is probably what accounts for its obscurity. But that does not mean you should not watch it. It means that you can watch it again and again without getting sick of it. The story is of a musicology professor who visits her sister in the mountains and becomes determined to capture the traditional music she there discovers. It is just sort of lovely, and with such great music. Snuggle up on the couch with a cup of tea and a ready sigh, and enjoy.

The Damned United
This probably pushes the definition of costume drama since it is set in the 1970s, but still, it is a different time, and the aesthetic takes some crafting. Therefore, I am including it. I am also including it because it is such a great movie, and I have  never heard anyone mention it. I am pretty sure it was not a huge box office hit, even across the Atlantic where people know who Brian Clough was. He was a football (soccer) manager, and is the lead character. Normally I would not have five minutes for a sports film, but this was really a character piece, subtle and stylish and not at all requiring any interest in the game itself.

The Conspirator
I think about twelve people saw this movie. I certainly do not see it included in any lists of best costume dramas anywhere, yet it is, in my opinion, one of the most clever and thought-provoking films of our time. Do not be put off by the Americana look of the branding. The plot is based on the trial of one woman accused of conspiring to assassinate President Lincoln, but the theme is really an exposition in defence of the rule of law that I expect escaped the average viewer. I, however, left the theatre reeling with the implications of all the film had to say. It is a movie that will make you think, in a good way, while engaging you in a riveting drama that stands on its own as a fascinating bit of storytelling.

Max
Of all the films I am listing here, I feel most confident in assuming you have not seen this one. It was a made-for-TV movie that I only watched because I was determined to watch everything John Cusack had ever been in, and he plays essentially the lead role. It is the story of Adolph Hitler in the early interwar period, when he was an aspiring watercolour artist and WWI veteran. Cusack plays a Jewish art dealer who takes an interest in his work. The portrayal of this character of Hitler can only be called brave and fascinating. Who is there in history more infamous, more reviled? How can you possibly show him as anything but a horrific, demented monster, while still trying to offer some kind of understanding of where he came from? The character in the film is despicable and pathetic, and still believable. It feels like you could actually know that person, which is terribly frightening. It is not a luscious kind of costume drama. It is not about the aesthetic of the period. Most of it takes place in a warehouse. It is character driven and incredibly well done. Plus it has Molly Parker in it (go Canada!).

Down with Love
From what I can gather, this film was a box office flop, and being set in the 20th Century, might not be what you think of as a costume drama, especially since it is a comedy. Some might think it not deserving of inclusion with the other films listed here, but I stand by my choice. I don't subscribe to the view that a movie has to be weighty to be good. There is no angst involved in this one. It is clever, adorably mid-century and highly enjoyable. Yes, it is not a serious film, but it gets 5 stars from me because it does precisely what it sets out to do, and does so with style. If you are looking for something light-hearted yet well-crafted, this one comes with my enthusiastic approval. I have probably watched this ten times and am still not tired of it. 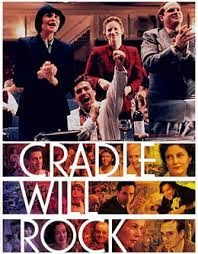 Cradle Will Rock
This is my favourite film of all time. I have yet to be so blown away by a film as I was by this one, and were it not for a mention of it in a newspaper listing in the late 1990s, I might not have heard of it. That's a lie. It has John Cusack in it, so I would undoubtedly have heard of it. The incredible fact of this film is who else is in it: Bill Murray, Vanessa Redgrave, Susan Sarandon, Emily Watson, Joan Cusack, Hank Azaria, Cary Elwes, Paul Giamatti, John Turturro, Tenacious D (both of them), and the list goes on. How could you not have heard of this movie, you might ask yourself? I ask the same question.  It is written and directed by Tim Robbins, who, though famous, is not as renowned as he deserves for all his diverse genius. I cite Bob Roberts as my evidence. (It's not a costume drama, so couldn't list it here, but watch it anyway. It is my second favourite film after Cradle Will Rock. It's like Wag the Dog meets Best in Show meets something infinitely superior to either.) When I watched Cradle Will Rock for the first time with a group of friends, we actually all stood up and cheered aloud at the screen. BRAVO! BRAVO! Oh, I am getting excited just thinking about it.

In addition to the films listed above, there were a few that I thought too well known, or critically recognised, to be included, but still somewhat obscure, and deserving of a little more praise, even if you have seen most of them. I have set them out below. If there are others you think worthy, please mention them in the comments as well.

Mrs. Henderson Presents
Judy Dench plays an eccentric, aristocratic widow who decides to take charge of a theatre left to her by her late husband. It is set in WWII during the blitz, and is poignant, amusing and everything you want it to be.

Amazing Grace
I don't really know what to tell you about this film except that if you are looking at it thinking, "I wonder if this is any good?" it is, and you should watch it. It has lots of great actors in it, including the ubiquitous Romola Garai and many, many others. It is about Lord Wilberforce and his quest to abolish slavery. It is the first film in which I saw Benedict Cumberbatch, playing Pitt the Younger long before he was any kind of heart throb. It captures both the personal story of WilliamWilberforce as well as the great historical drama of human rights and the law.

Moll Flanders
You might be aware that there is a novel of this name, by Daniel DeFoe. Do not be fooled. They both bear the name of their title character, a woman in 18th Century England. However, there end the similarities. There is virtually nothing in this movie that could be said to have been taken from the book, but it need not necessarily follow that the movie falls short. In my own, possibly singular opinion, the film is actually far superior to the book, perhaps not in their entire respective historical contexts, but just as something to pick up here and now. I expect the discrepancies account for the mixed reviews. If you haven't read the book, or are able to set aside any expectations of this as an adaptation, I recommend this as a film that will make you want to cheer out loud.

Hilary and Jackie
This film was nominated for 2 Oscars, but it still is not that well-known considering how brilliant it is. This might have been the first role in which I saw Emily Watson, and I have certainly been devoted to her ever since. The film is the true story of the famous cellist, Jacqueline Du Pre, and her lesser known sister, flautist Hilary. It tells the story twice, once from the perspective of each sister, and it has such great acting and writing. It is moving and at times a bit disturbing, but utterly compelling.

Miss. Potter
This one did win a Golden Globe and it does star more Hollywood-level celebrities, specifically Ewan MacGregor and Renee Zellwiger, a pairing I think is destined to be classic. Oh, and again it features Emily Watson. I must really like her or something! It is the story of Beatrix Potter, with all her brilliance and idiosyncrasy.  It is so pretty, and touching, and lovely. I could watch it over and over

The Young Victoria
Oh what a pretty, pretty film this is. If only Queen Victoria had looked anything like Emily Blunt, poor girl. You have all probably seen this, but I just wanted to list it because I love it so much.

Ever After
I have confessed many times in this blog to being a huge Disney fan, and lover of fairy tales. I hope the readers are not so prejudiced as to consequently doubt my intelligence or discernment in the art of film or historical portrayal in general. This film is supposed to be the story of what "really" happened to the "real" Cinderella. To me it is a terrific balance of Hollywood fantasy, humour and great storytelling.

Bright Star
The worst thing about this film is the Scottish accent of one character. Otherwise, I cannot find any fault with it. It does get mentioned in lists occasionally, but I don't think it is a really high-profile movie. It is a very personal and understated portrayal of Keats near the end of his all-too-short life. It captures his genius and the tragedy of his death without milking it. It makes the people all seem very real and, to a point, ordinary, though obviously poetic and intellectual. It is beautifully shot, but still a bit gritty, though not in that obnoxious let's show everyone how horrible the olden days was kind of way. It's just very intimate. Plus, it stars Freddie from The Hour and I love him.


These are all based on my personal taste, which not everyone may share, but I hope I may have brought to your attention a new favourite that you might not otherwise have heard of or considered watching.

Please also do watch the video at top right about the upcoming Regency costume ball taking place in Calgary May 16, 2015.